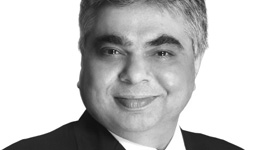 Nirmit Parekh is Managing Director India with the LIASE Group. Throughout his career, he has worked closely with automotive and industrial companies to identify and recruit world-leading talents for large Indian groups, multinational conglomerates and start–up ventures. Often cited as a pioneer in retained executive search, Nirmit’ s more than 20 year career in executive search has predominantly been cross-border in nature.

As the Founder and Managing Director of 3P Consultants, one of India’s leading executive search company, Nirmit has helped his automotive and industrial clients build their Indian and Asian team since 1990.

He has also played an active leadership role for the Indian recruitment industry. He is one of the founders of the Executive Recruiters Association and assumed responsibility as the Chairman of its Ethics Committee. In 2007, Nirmit was elected as Chairman of Penrhyn International, a role in which he served for two consecutive years.

Why not profit from our experience by getting in touch with us now? We look forward to hearing from you.